Every Wednesday in November 2022 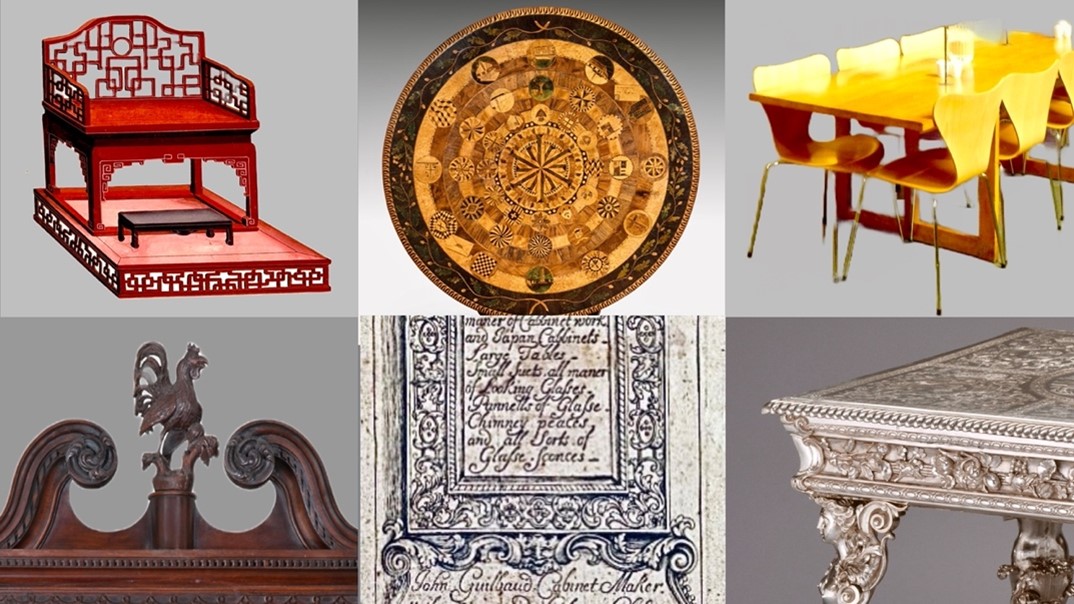 Jamaican inlaid centre table (c. 1846-51) by Ralph Turnbull © Thomas Coulborn & Sons; chairs in the dining room at St Catherine’s College, Oxford (1962) by Arne Jacobsen © A. Davies; detail of a silver side table (1698-99) by Andrew Moore © Royal Collection Trust; detail of a John Guilbaud trade card c. 1693-1712 © Museum of the Home; detail of a tall case clock (1770-79), the case made by George Pickering © Philadelphia Museum of Art; design for export furniture (ca. 1800) by an anonymous Chinese artist, watercolour over graphite, © The Met. Museum, N.Y.

BIFMO-FHS is offering a course on Zoom every Wednesday throughout November when each week curators and historians will consider how methods and ideas about furniture making have been transmitted between countries from the seventeenth to the twentieth century. Some speakers will consider how methods and designs in Britain were influenced by immigration to this country, while others will look at the impact of British furniture makers who emigrated to other countries such as the United States.

These presentations will include a wide variety of fine examples of craftsmanship from silver furniture in the seventeenth century, to Ralph Turnbull in nineteenth century Jamaica, through to the impact of Danish furniture importers and Arne Jacobsen in the twentieth century.

Each week the session will start at 16.30 (GMT) and conclude at 19.30 (GMT).  Please note that for the first week, our US participants on the East Coast will only be four hours behind the UK.  Weeks 2 to 5 will revert to the usual five hour difference.

Most of the presentations will be 30 minutes in length followed by a short Q&A session. The programme on Week 4 varies slightly and will include 5 speakers instead of 4, but the total length of the session will be the same (3 hours). There will be a 15-minute comfort break approximately half way through each weekly programme.

It is possible to book individual weeks but you will benefit from a discount if you book all 5 sessions together.  FHS members benefit from a further discount on all tickets.  Tickets are available through Eventbrite here.

Don't worry if you are unable to attend a live event, as most of the presentations will be recorded and every ticketholder will receive a link to the relevant recording.

Furniture Making in London and Europe

Global Networks and Furniture Making in the 18th Century

Immigration and Emigration of Furniture Makers in the Nineteenth Century

Making the Modern World: Global Connections into the 20th Century

Please click here for further information about the speakers and the presentations on Eventbrite.

If you have any questions, please email Ann Davies at bifmo@furniturehistorysociety.org.