Middle Temple, one of the four Inns of Court, is located at the western border of the City of London.  At its heart is the great Elizabethan Hall, a survivor of both the Great Fire and the Blitz.  Its most spectacular feature is the double hammer beam roof in the Perpendicular tradition, and the 1570s screen which was reconstructed after enemy action blew out the east gable in 1941. The elaborately carved doors, reminiscent of Ham House, are a century later. The walls are lined with the coats of arms of the successive Master Readers of the Inn starting in 1597.  The stained glass windows display the coats of arms of distinguished members, including Walter Raleigh and two Princes of Wales.  The first recorded performance of Twelfth Night took place here in 1602 thus making it the last surviving venue of a Shakespeare ‘first night’.   The high table, at 29 feet 4 inches, is the longest table made from a single oak, the tree being floated down the Thames from Windsor Great Park, as a gift from Elizabeth I. 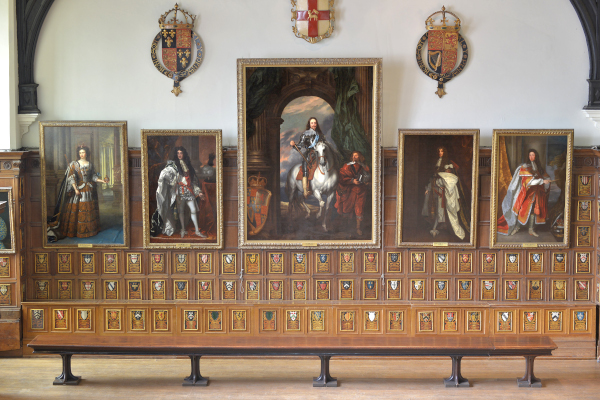 The Hall and adjoining Bench apartments contain an eclectic collection of  furniture—chairs, side tables, clocks--which have accrued to the Inn over the centuries, often in historicist styles.   Meals are still taken daily on the 1720 dining tables and new barristers sign the register on the hatch cover of Sir Francis Drake’s The Golden Hind.  A previous FHS visit stimulated useful conversations about attributions.

This event is now full. Please contact Beatrice Goddard, Events Secretary, if you wish to be placed on a waiting list. events@furniturehistorysociety.org